1. Tell us about yourself. Where are you from/ where did you grow up? What attracted you to hockey?

I grew up and went to school in Surrey. I moved to Edinburgh for university and remained here ever since, other than one year I spent playing hockey full-time in Holland. As well as playing hockey internationally, I also teach physical education and am Head of Girls Games at Fettes College.

I first began playing hockey when I was 7 after being invited to a local club by a family friend. I started to take it more seriously when I went to senior school at age 11. I’ve always been very competitive so I enjoyed that side of it, but I was also attracted to the team element of the sport, and the fast and skilful nature of the game.

2. Yoga. Useful for you professionally/personally? How has it made an impact on you?

Yoga has helped me both professionally and personally. From the standpoint of a professional hockey player, it has massively helped my flexibility, balance, and general strength. It has also helped me during rehabilitation for a number of injuries. Personally, I love the challenge of yoga as it often pushes me in a way different to how I would be pushed in my regular training. I also appreciate the mental side of yoga; being able to switch off and focus on being on the mat and in the moment.

2. Yoga. Useful for you professionally/personally? How has it made an impact on you?

Yoga has helped me both professionally and personally. From the standpoint of a professional hockey player, it has massively helped my flexibility, balance, and general strength. It has also helped me during rehabilitation for a number of injuries. Personally, I love the challenge of yoga as it often pushes me in a way different to how I would be pushed in my regular training. I also appreciate the mental side of yoga; being able to switch off and focus on being on the mat and in the moment.

3. People don’t always see yoga and hockey as being closely connected. How did you first find yoga? Do you see it advancing in this particular field?

I went to the odd yoga class over the years but I didn’t really properly get into it until I started at Tribe. Over the last three years, yoga has become a key part of my training. I think yoga is very beneficial for hockey, specifically to compliment our pitch and gym training. It is also a great method of recovery, improving flexibility and assisting with injury prevention.

4. How about Tribe? Let us know about your experiences at Tribe; what drew you to it and what kept you coming back?

I LOVE Tribe! I am lucky that I live five minutes from the New Town studio. I have been going with a few friends since it first opened. I loved all of the options for classes and tried several different ones, but now I typically stay with Power Yoga and Flow Yoga. I am hugely lucky to be part of the Elite Athlete programme, which allows me to attend Tribe classes regularly. Another draw to Tribe is the teachers. I have my favourites, but that being said I’ve never been to a class I didn’t like. I also enjoy trying classes with new teachers because everyone brings a different experience. 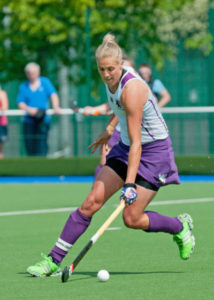 Becky playing for Scotland against Great Britain at the National Hockey Centre in Glasgow, June 2016.

5. At what point in starting with Tribe did you first notice it was beginning to help physically? What did you feel?

I quickly found the benefits yoga had on my training and immediately incorporated it into my training week. I have never been particularly flexible and haven’t always been the best with stretching after training, so it was quite soon after that I began to find that going to yoga regularly improved my overall flexibility, balance, and upper body strength.

6. It is widely known that professional athletes are often under a huge amount of pressure. Do you think, beyond the physical benefits of yoga, there are mental benefits too?

I think the mental benefits of yoga are massive. Combining being an international athlete with a full-time job is both mentally and physically demanding. It took me quite a long time to actually be able to fully switch off and focus during classes, rather than my mind being on my training, work, etc. Now I’m able to completely focus during class and have found this enormously beneficial.

I found it particularly useful when I was coming back from shoulder surgery last year as it involved a long rehab process that was tough mentally as well as physically. Yoga really helped with this. I now use some of the breathing techniques and some basic yoga flows as part of my pre-match routine to focus me while reducing my pre-match nerves. 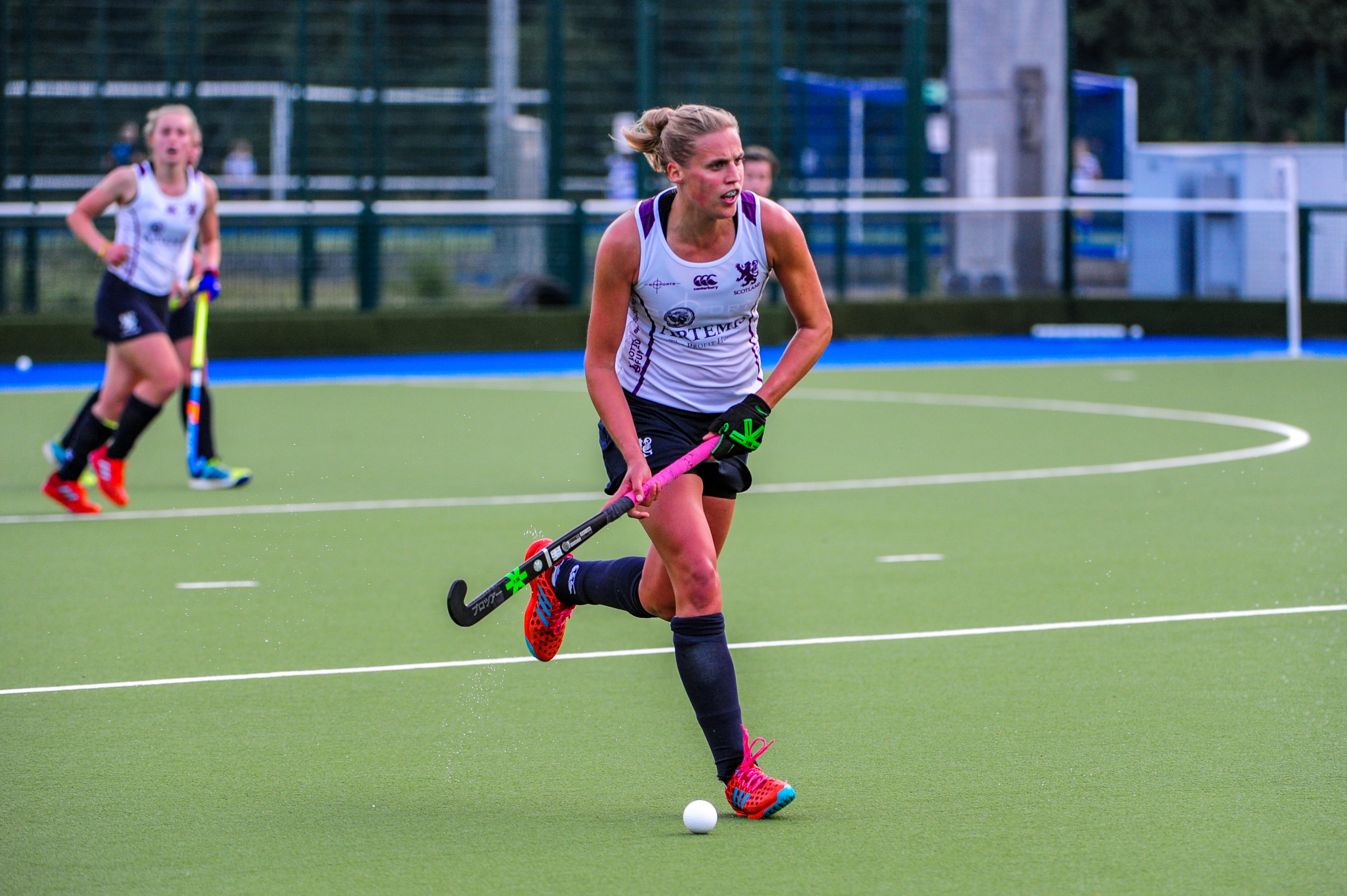 Becky playing against Ireland in Glasgow, 2018.

7. Are you seeing yoga becoming more included in sports overall? Do you think it is something we should be looking at developing amongst younger athletes?

Yes, I think many sports are now using yoga as part of the recovery process, as well as for improving overall flexibility and strength. I think yoga should be used for developing younger athletes as it encourages them to assume good habits, while also helping with time management and the general stress of being an athlete.

I currently teach some basic yoga to my pupils at Fettes College and have been fortunate to have some current and former Tribe teachers take a session with my U15 and 1st XI hockey girls. They loved it!

8. What were your favourite classes at Tribe? Did you take a variety of different ones or stick to only a few?

Power Yoga is my favourite. I also love Yoga Sculpt and Tribe Cycle, although I tend to only take these classes during the quieter phases of my training.

9. When you’re not playing hockey or doing yoga, what might you be up to?

I got married a couple of months ago, so I guess spending time with my husband!  I’m really active in both of my jobs as a professional hockey player and a PE teacher, so I love to relax in my free time. Catching up with friends over brunch or coffee in Stockbridge is another favourite on my rare days off!

10. Has yoga taught you anything else in particular about yourself?

11. Any particular role models? Why him/ her/ them?

Kate Richardson-Walsh, the former British hockey captain and Olympic gold medallist from the 2016 Summer Olympics in Rio, has always been a huge role model for me. She is a brilliant hockey player, a professional in everything she does, and an inspirational leader.

12. Where was the last place you travelled?

Due to hockey, I haven’t been able to travel much on holiday over the past ten years, although I have travelled the world playing hockey, most recently to the Australia’s Gold Coast. We are currently planning our honeymoon this year, and are hoping to visit Namibia, Botswana, and Tanzania—so I’m very excited for that.

13. Now a few silly questions. You’re a new addition to the crayon box. Which colour would you be and why?

Orange because it’s a combination of red and yellow. I always think of yellow as being quite warm, relaxed, energetic and happy and red as being fiery, determined, and competitive. I like to think I’m a bit of both. 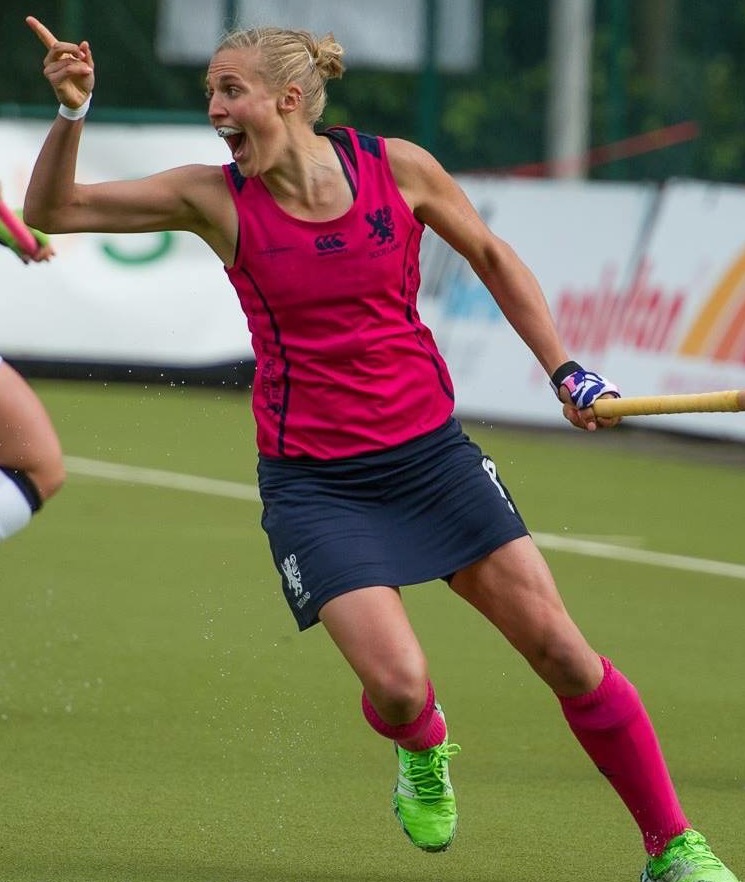 Celebrating after scoring against Germany in Hamburg!

14. If you could only choose one song to play every time you walked into a room for the rest of your life, what would it be?

“Mr. Brightside” by The Killers. Just because it’s my favourite song!

15. What would we find in your refrigerator?

Mostly fruits and vegetables—we just bought a new juicer! Also a lot of meat. I am married to a rugby player who eats a lot of it!

16. What did you have for breakfast this morning?

17. When was your last class? Will we see you again soon?

My last class was Power Yoga with JJ Robb. I’m currently on a half term from school and we are on a slightly lighter training week so I have more time to do yoga!

In terms of hockey, we are in the middle of the club season at the moment so there’s a lot of focus on that (I play for Edinburgh University). We were away with Scotland for a five-day training camp in Nottingham and then Sevenoaks in Kent for training and some friendly matches against GB U23. Next summer we have the Europeans that are being held in Glasgow, and that’s our longer-term focus.